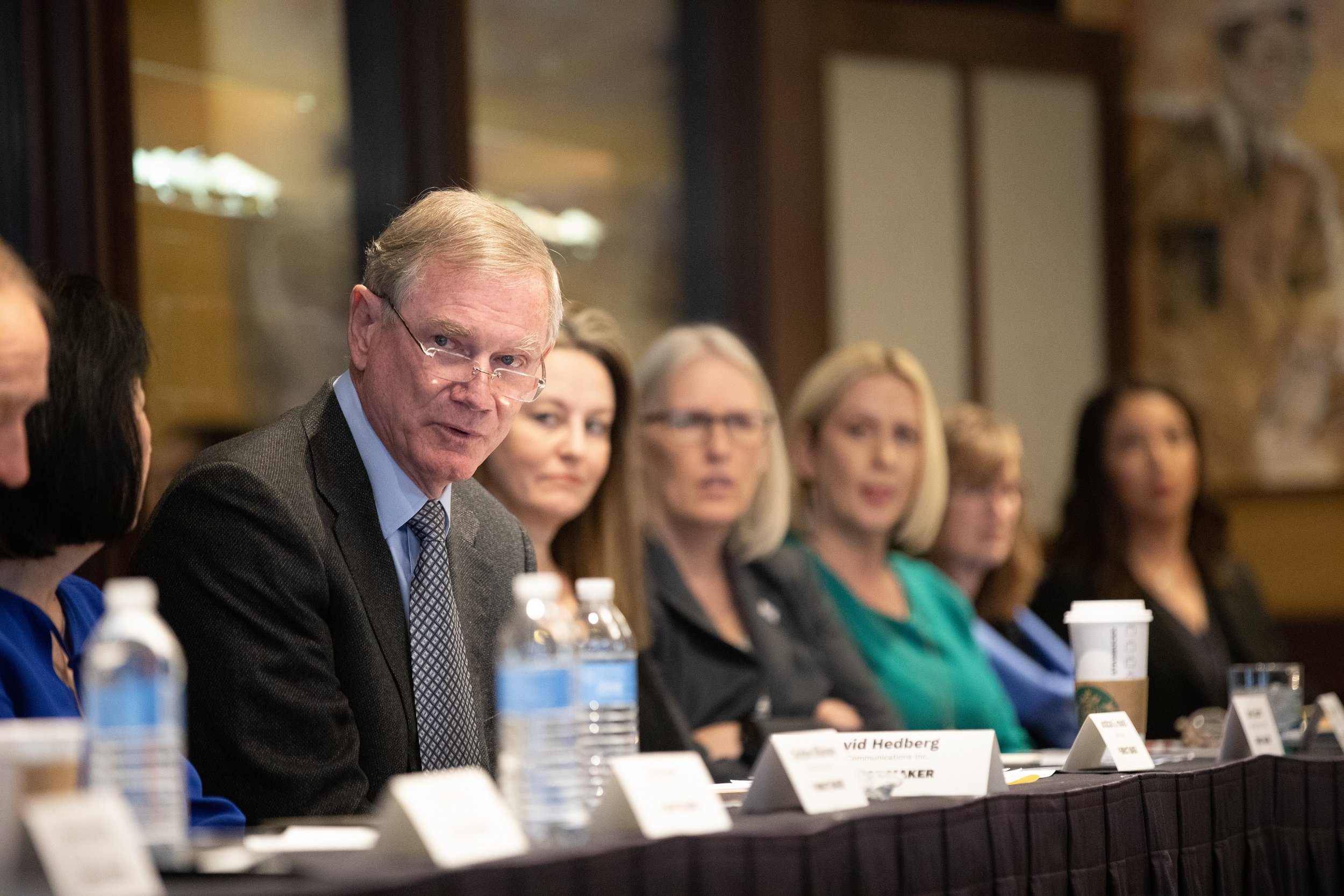 “What is the number one issue the Impact Maker can address for Arizona that will have the farthest reaching and longest lasting impact on Arizona’s economic strength and its residents’ quality of life?”

A diverse cross-section of the Valley’s most respected leaders gathered at the historic Camelback Inn for an intimate discussion, wrestling with this question. This first annual Impact Symposium focused on how Valley Leadership’s Impact Maker and its newly formed Impact Teams can work together to create systemic change.  The Symposium will be held in the spring of each year to focus collective efforts.

Impact Council chair Bill Post led the discussion with a focus on the importance of leadership being “driven to do,” a core value of the Impact Maker’s work. Bill’s co-facilitators of the event were Valley Leadership’s 2019 Man and Woman of the Year honorees, John Graham and Colleen Jennings-Roggensack.

Bill opened the meeting sharing a unique perspective on how long-term impact has been made throughout Arizona history acknowledging the need for deeper engagement across sectors and leaders to solve today’s concerns. He expressed his hope that the newly formed Impact Teams could serve as a critical vehicle to connect, leverage and mobilize leaders to have meaningful impact across our communities.  The concept was well-received among the group of nearly 40 leaders, who shared their commitment and enthusiasm for the Impact Maker’s work.

Sybil Francis, President and CEO of the Center of the Future of Arizona, provided further context for the conversation by reviewing the results of the organization’s Gallup survey on what Arizonans believe are the most pressing issues facing their communities. Many of the survey’s findings were underscored throughout the Impact Symposium discussion.

What are the Issues?
Overall, the group identified issues focused on making Arizona a great place to live, work, learn and play. Issues ranged from the development of quality jobs and the preparation of the workforce, to supporting Arizona’s growing and diverse population, which includes school-aged and aging, by making sure they have the health services, housing and education needed to thrive. There was a particular focus on addressing more vulnerable populations: aging, minorities, and children ages 0-5, to ensure that Arizona is a welcoming and supportive place for these individuals or those taking care of them. Other topics included making Arizona a vibrant place to live, including supporting arts and culture, a sustainable environment and civic engagement that is representative of the state’s diverse population.

So How Do We Get There?
The group focused on building the public awareness and political will needed to make systemic changes in each of the issue areas, including developing an understanding of the inter-connectivity between them. There was a clear need for leadership to be able to organize toward achieving goals and facilitate action. Also identified was the need to strengthen and update Arizona’s resource structure in order to support the state’s growth and improvements, especially for education and economic development.

Valley Leadership’s Role
There was consensus that Valley Leadership and the Impact Maker Teams could play a critical role in leading Arizona to address these key issues, first by serving as examples of the type of leadership and civic engagement that is needed. Second, given VL’s prolific network, the organization could provide substantial visibility to the key issues and aid in building public and political will to lead on this issues. Finally, VL could serve as a convener or organizer where needed, to be able to connect the dots, focus on the long-term issues, facilitate strong execution around shared goals, and celebrate the good work already being done.

Driven to Do
To kick off the Impact Maker’s work, VL has launched two new Impact Teams: Education and Health. The Education Impact Team will be focused on increasing post-secondary access and pathways to high-quality jobs. The Health Impact Team will be working on addressing the opioid crisis and improving food access and nutrition. The Impact Teams consist of VL alumni and class members who are passionate about these issues as well as public, private and community leaders who are currently working in these spaces.

To learn more about the Impact Maker’s work or to get involved, visit www.impactmakeraz.org.